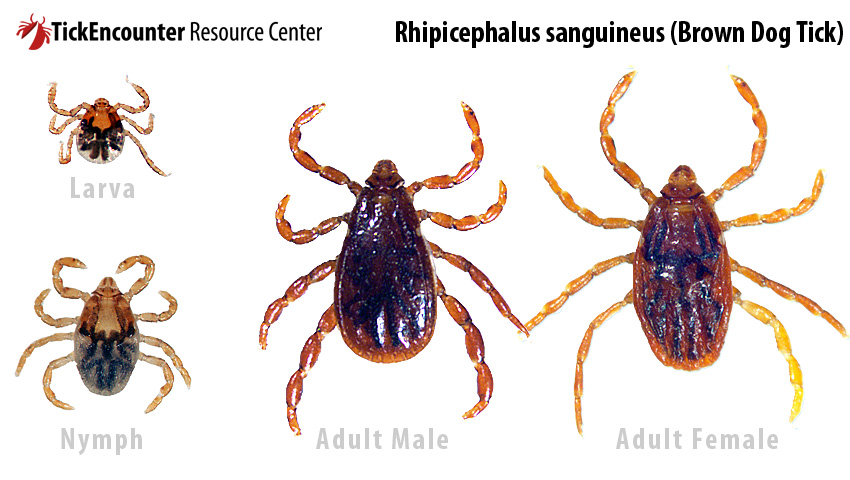 Brown Dog ticks have a world-wide distribution,    and can be found throughout the United States, although they are encountered more frequently in the southern tier of states. They occur predominately in    and around human settlements and infest homes, animal pens, and dog kennels, often causing high levels of infestation both on dogs and in homes. These    ticks can spend their entire life cycle indoors. Under optimal conditions, brown dog ticks complete their life cycle in as few as three months. All life    stages of this tick can transmit Rocky Mountain Spotted Fever rickettsia (Rickettsia rickettsia) to dogs, and rarely to humans. Both nymphal and adult    stages can transmit the agents of canine ehrlichiosis (Ehrlichia canis) and canine babesiosis (Babesia canis vogeli and Babesia gibsoni-like) to dogs.    Controlling brown dog tick infestations can be difficult and usually requires a four step process: treating the pets, treating the house, treating the    yard, and sanitizing the house by focusing on vacuuming.  This process may take several treatments and take several months to eradicate the infestation.

Adult males and females can be found at all times of the year and can survive for 18 months without feeding. They prefer to feed on dogs but will feed on other mammals, and    occasionally humans. Males only feed for short periods of time before mating but females feed for about a week before becoming engorged. After    digesting the blood meal, female brown dog ticks can lay up to 4,000 eggs. The eggs are often laid on top of kennels, on ledges, or in cracks and    crevices in or around a house. Larvae hatch from eggs in 2 to 5 weeks.

Nymphs also can be found at all times of the year and survive for 6 to 9 months without a blood meal. Nymphs also prefer to feed on dogs but will feed on   other mammals, and occasionally humans. Nymphs blood feed for five to ten days, and after detaching from the host, they take about two weeks to develop into adult stage ticks.  After detaching from the host, engorged nymphs typically hide in and around furniture, windows, edges of rugs,   house siding, and foundations.

The six-legged larvae can be active at all times of the year, and can survive for 6 to 9 months without feeding. Like the adult and nymphal stages, larvae prefer to feed on dogs but will feed on other mammals and occasionally humans. Larvae blood feed for three to seven days before detaching from the host and take about two weeks to develop into nymphs. Engorged larvae typically hide in and around furniture, windows, edges of rugs, house siding, and foundations.