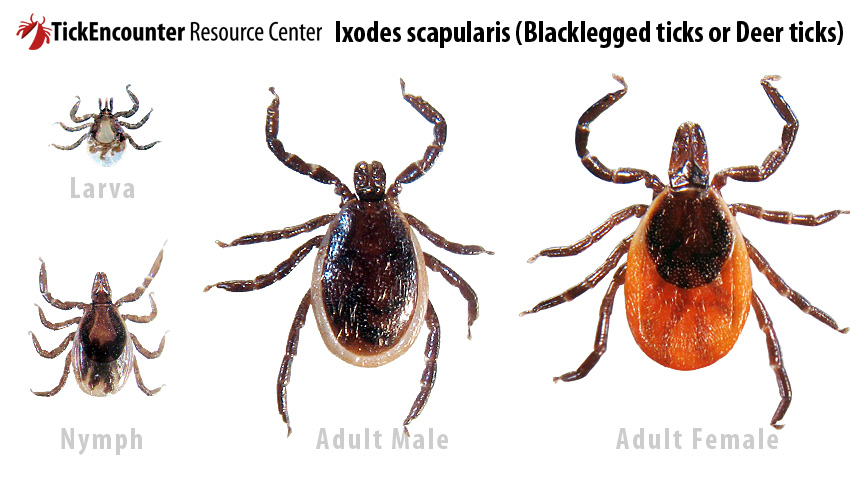 Blacklegged ticks (a.k.a Deer ticks) take 2 years to complete their life cycle and are found predominately in deciduous forest. Their distribution relies greatly on the distribution of its reproductive host, white-tailed deer. Both nymph and adult stages transmit diseases such as Lyme disease, Babesiosis, and Anaplasmosis.

Adult males and females are active October-May, as long as the daytime temperature remains above freezing. Preferring larger hosts, such as deer, adult blacklegged ticks can be found questing about knee-high on the tips of branches of low growing            shrubs. Adult females readily attack humans and pets. Once females fully engorge on their blood meal, they drop off the host into the leaf litter, where they can over-winter. Engorged females lay a single egg mass (up to 1500-2000 eggs) in mid to late May, and then die. Larvae emerge from eggs later in the summer.  Unfed female Blacklegged ticks are easily distinguished from other ticks by the orange-red body surrounding the black scutum. Males do not feed.

Nymphs
Nymphs are active May-August, and are most commonly found in moist leaf litter in wooded areas, or at the edge of wooded areas. The eight-legged, pin-head sized nymph typically attaches to smaller mammals such as mice, voles, and chipmunks, requiring 3-4 days to fully engorge. Nymphs also readily attach to and blood feed on humans, cats and dogs. Once fed, they drop off into rodent burrows or leaf litter in animal bedding  areas where they molt and emerge as adults in the fall.

The six-legged larvae are active July-September and can be found in moist leaf litter. Larvae hatch nearly pathogen-free from eggs (only  Borrelia miyamotoi is known to infect blacklegged tick larvae), and remain in the leaf litter where they will attach to nearly any small, medium or large-sized mammal and many species of birds. Preferred hosts are white-footed mice. Larvae remain attached to their host until replete, which usually requires 3 days. Once fully engorged, the larvae drop off of the host and molt, re-emerging the following spring as nymphs.