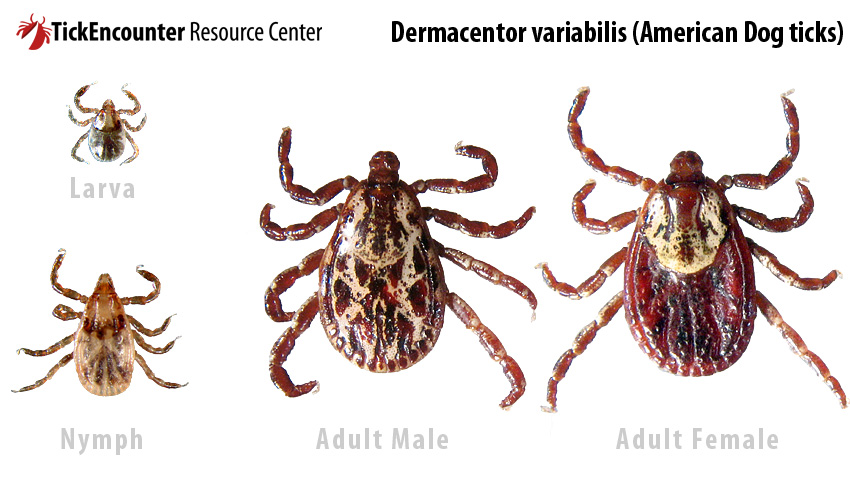 American Dog ticks are found predominantly in areas with little or no tree cover, such as grassy fields and scrubland, as well as along walkways and trails. They feed on a variety of hosts, ranging in size from mice to deer, and nymphs and adults can transmit diseases such as Rocky Mountain Spotted Fever and Tularemia. American dog ticks can survive for up to 2 years at any given stage if no host is found. Females can be identified by their large off-white scutum against a dark brown body.

Adult males and females are active April- early August, and are mostly found questing in tall grass and low lying brush and twigs. They feed on medium-sized wildlife hosts, including raccoons, skunks, opossums and coyotes, as well as            domestic dogs, cats and man. Adult American dog ticks commonly attack humans. Male ticks blood feed briefly but do not become distended with blood. Once finished feeding, males mate with the female while she feeds, which can take one week or more. Once replete, female dog ticks detach from their host and drop into the leaf litter, where they can lay over 4,000 eggs before dying.

Nymphs are active May - July, and feed on small and mid-sized animals, such as mice, voles, rabbits, raccoons and skunks. Nymphal dog ticks rarely attach to humans. Once engorged, nymphs detach from their host, falling into the grass/meadow thatch and leaf litter where they molt into adults.

Larvae are active late April - September, and can be found questing for a host (voles, mice, raccoons, opossums, etc.) in the leaf litter. In the northeastern U.S., larvae overwinter and are most abundant in the spring and early summer. After blood feeding for 3 to 4 days, larvae detach from their host, falling into the grass/meadow thatch and leaf litter where they molt into nymphs.