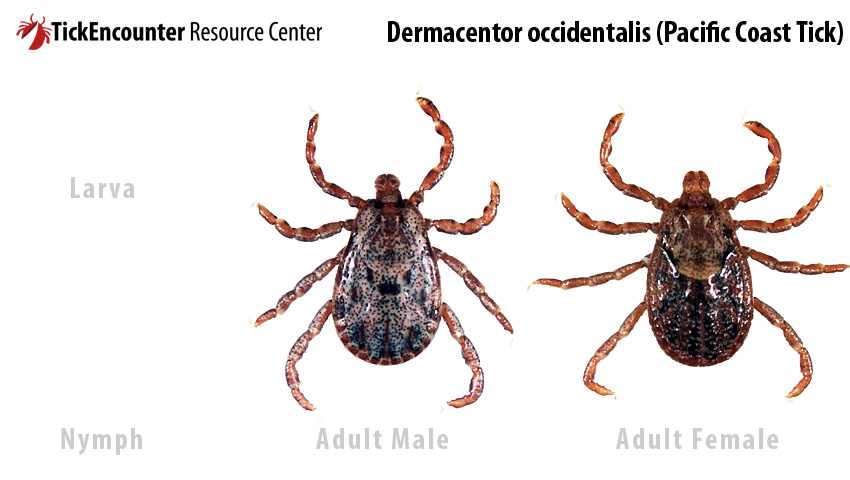 Pacific Coast ticks    are human-biting ticks with a broad host range, found predominantly in shrublands, chaparral, and along trails from Oregon to northern Baja    California and Mexico. Pacific Coast ticks are the most common tick found nearly throughout California but are easily confused with other    less common Dermacentor ticks found along the western coastal regions of the U.S (D. variabilis, D. andersoni,    D. albipictus. All life stages of this tick can    transmit Rocky Mountain spotted fever (Rickettsia rickettsii) to humans, cats, and dogs.  Nymphs and adults can transmit 364D rickettsiosis (Rickettsia phillipi) to humans,    tularemia (Francisella tularensis) to humans, cats, and dogs, and bovine anaplasmosis to cattle. These ticks also have been implicated    in cases of tick-bite paralysis in cattle, deer, and ponies.

Adult males and females Pacific Coast ticks may be    active year-round but peak activity typically occurs during cooler months, and especially in April and May. Adults prefer to feed on cattle, horses, deer and    other large mammals. The males attach and feed for short periods of time to initiate spermatogenesis, but females feed for 6-10 days before dropping off their    host and laying eggs. Eggs are laid about 3 weeks after the engorged adult detaches.

Nymphs also are most active during    the late winter and early spring. Nymphs prefer to feed on small rodents and other small mammals, especially squirrels.  Nymphs can be found questing for hosts    on the ground or up to five inches from the ground on the sides of vegetation. Once nymphs have consumed a full blood meal (about 6 days) from their host they    detach and take between 15 - 25 days to develop into adult males and females.

Larvae of Pacific Coast ticks can    hatch from eggs in about a month and are active from summer through winter, with peak activity in July.  Larvae prefer to feed on small rodents and other small    mammals, typically taking 4 days to engorge. Once the larvae have consumed a full blood meal from their host they detach and take about 2 weeks to develop into nymphs.