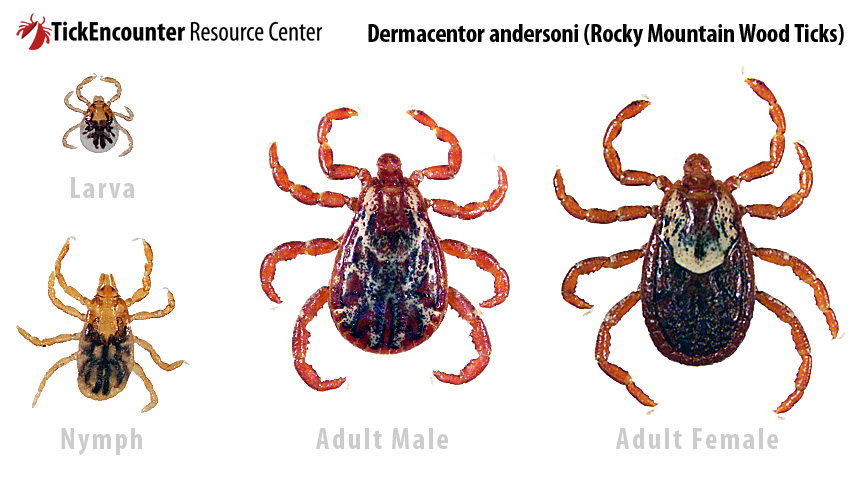 Rocky Mountain Wood ticks  are found predominantly in shrublands, lightly wooded areas, open grasslands, and along trails, mainly at lower elevations. All life stages of this tick can transmit Colorado tick fever virus (CTFV) to humans, and Rocky Mountain spotted fever (RMSF) rickettsia (Rickettsia rickettsii) to humans, cats, and dogs. Rocky Mountain wood tick saliva contains a neurotoxin that can occasionally cause tick paralysis in humans and pets; usually a bite from an adult female induces an ascending paralysis that dissipates within 24-72 hrs after tick removal. Both nymphs and adults of this tick can transmit the agent of tularemia (Francisella tularensis) to a variety of hosts, including humans, cats, and dogs.  These ticks typically take two to three years to complete their life cycle.

In the Mountain region of the U.S., adult male and female wood ticks can be active from January through November, but are most common in the late spring/early summer and their activity diminishes during the hot and dry mid-summer period. Further west in the northern inter-mountain region, large numbers of adult wood ticks can occur in April and May. Adult wood ticks survive for up to 600 days without feeding. Adult ticks prefer to feed on medium to large mammals and can be found questing about knee-high on the tips of vegetation. Males only blood feed for short periods of time to initiate spermatogenesis, after which they seek to attach to and mate with female ticks.  Female wood ticks feed for 4-17 days before dropping off their host and laying up to 6,000 eggs.

Nymphs are active from March through October and survive for up to 300 days without feeding. Nymphs prefer to feed on rodents, especially voles, and rarely attach to humans or pets. Once attached to a host, nymphal wood ticks take 3-11 days to feed to repletion. After consuming a full blood meal from their host, nymphs detach and can develop into the adult stage in as little as two weeks. Nymphs may enter a diapause, usually induced by diminishing day-length, and which can be broken when longer day-lengths signal more favorable environmental conditions.

Larvae can hatch from eggs as soon as one to five weeks after egg laying. Larvae are active from March (further south) through October (further north) depending on the latitude, and can survive up to 117 days without feeding. Larvae prefer to blood feed on rodents and take two to eight days to feed to repletion. Once larvae have consumed a full blood meal they drop from their host and take one to three weeks to develop into nymphs. Larvae also may enter a diapause, induced either by diminishing day-length or unfavorable environmental conditions.