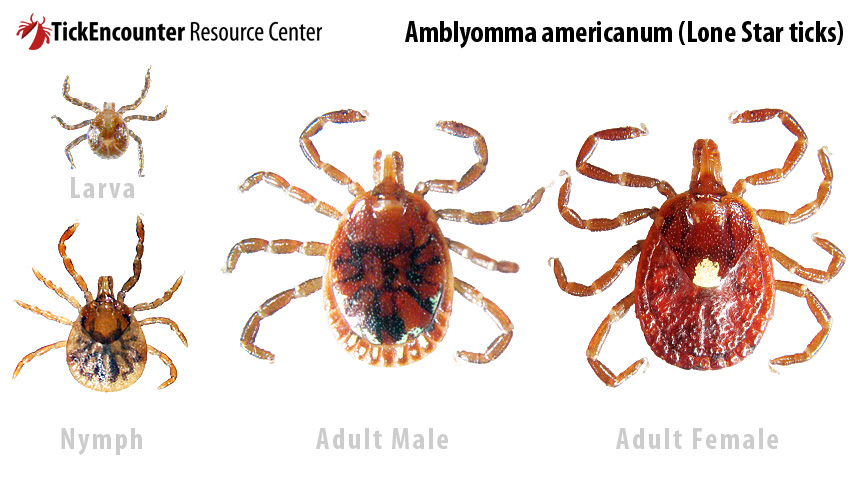 Lone Star ticks are found mostly in woodlands with dense undergrowth and around animal resting areas. The larvae do not carry disease, but the nymphal and adult stages can transmit the pathogens causing Monocytic Ehrlichiosis, Rocky Mountain Spotted Fever and 'Stari' borreliosis. Lone Star ticks are notorious pests, and all stages are aggressive human biters.

Adults are active April- late August and can be found questing for larger animals, such as dogs, coyotes, deer, cattle and humans on tall grass in shade or at the tips of low lying branches and twigs. Females are easily recognized by a single white dot in the center of a brown body, with the males having spots or streaks of white around the outer edge of the body. Females require a week to 10 days or more to engorge and can lay 2,500-3,000 eggs.

Nymphs are active May- early August, and can be found questing for deer, coyotes, raccoons, squirrels, turkeys and some birds as well as cats, dogs and humans. Where abundant, nymphs seemingly swarm up pant legs and can become attached in less than 10 minutes. Nymphs typically take 5-6 days to become replete, and once fully engorged, they fall off of the host into the leaf litter, where they molt into adults.

Larvae are active July- late September and can be found questing for a wide variety of animals, including cats, dogs, deer, coyotes, raccoons, squirrels, turkeys, and some small birds. After feeding for around 4 days, they drop off of the host and bury themselves in the leaf litter, where they molt into nymphs.